Another valuation method that is supplementary to the Discounted Cash Flow (DCF) method is relative valuation, aka “comps” or comparable multiples.

What Is Relative Valuation Used For?

The comparable multiples valuation method is primarily used in 2 ways:

Whereas DCF valuation method looks at the underlying cash flow that the company is expected to make over time, relative valuation does not look at the company’s internal performance.

If you take apart the words “relative valuation,” it does just that – you’re valuing the company relatively to its peer companies.

In both stock investing and transaction price setting, relative valuation is important to use, because you can analyze the company’s intrinsic valuation all you want, but if the market is not willing to pay for it, then the intrinsic valuation from analyzing underlying cash flows doesn’t matter.

For example, in stock investing, let’s say a public company’s DCF valuation says it’s worth $10 million, and the market cap is $5 million. Then, you might be tempted to buy this stock because you think it’s undervalued relative to what it’s worth.

But, upon closer inspection, you realize that compared to its peers, this company’s multiples are trading at overvaluation. That’s a signal that the industry itself is not valued high for whatever the reason might be.

So, you can buy the stock but if the market thinks the industry sucks, then the stock will never rise even if its DCF valuation says otherwise.

In that case, you can try to sell your company all you want at $10 million, but nobody is going to buy the company at that price, because the buyer will think it’s overpriced.

Public comps is when you look at public companies’ multiples. These are also called “trading multiples”. E.g. Price to Sales is market cap divided by the company’s revenue of a publicly trading company. This is an example of a public comp.

Precedent transaction multiples is when you look at multiples of companies that have been bought and sold and the company’s underlying performance.

The main difference between the two is that public comps is based on the company’s market cap; i.e. how much the market is paying for the company’s stock vs precedent transaction comps actually uses what one party paid for the company they acquired.

As explained above, comparable company multiples are used to either gauge whether a company is overvalued or undervalued or to apply the multiples to find out what the company’s valuation is.

When using multiples to gauge if a public company is overvalued or undervalued, you tend to use just the public comps.

And, when using multiples to set the company’s price to sell or buy the company, you tend to use both, because transaction comps factor in premiums or discounts in the industry when a company is bought or sold. How To Calculate Precedent Transaction Multiples

If you don’t have a $20k/year database like CapitalIQ or a Bloomberg terminal, pulling this data is going to be more difficult. One way to do it is to google search terms like [SaaS company transactions in 2019] and see if there are any news releases that indicate how much a company was bought for and their revenue.

This is like finding a needle in a haystack though… and repeating it 10-15 times.

I’ll leave a question to you guys: would past transactions data by industry be something you’d want to see? If so, then leave me a comment with the industry you’re looking for this data on, what the subject company you’re trying to value is, and what you want the data for.

If it’s worth researching and putting together in a post for you to download, then I’ll consider doing it.

The example private company I’m going to value is a small business that started about 4 years ago selling electronic toys on Amazon.

They started looking up the most popular electronic toys on Amazon and reached out to Chinese manufacturers who can replicate it. They have about 20 different toys on Amazon.

Their annual revenue is about $5 million.

Using the free screener, I looked up the closest competitors.

The free tools I use to screen the companies are unfortunately not going to give me the exact comparable companies I’m looking for, so I have to do some refining manually.

Here are my search criteria filters on the different stock screeners I mentioned above: 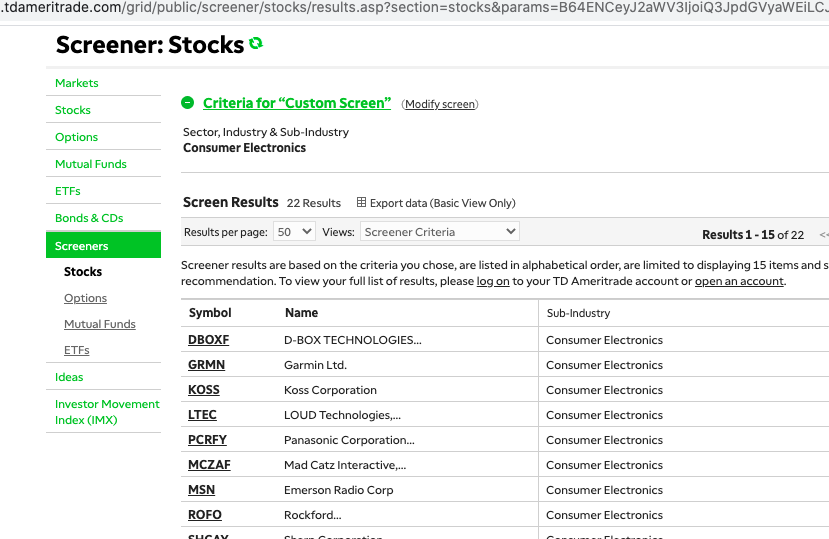 As you can see, sectors and industry criteria I can choose are very broad and different across the platforms. So, now I have to look up the companies one by one to choose the right ones.

Once I had the competitors, the rest was to look up the data one by one.

They’re not the best competitors because they’re too big and they’re focused on more complex consumer electronics. But, you can apply discounts to factor in your subject company being much smaller and the industry being much narrower.

The point of relative valuation is to get you a ballpark and to triangulate the DCF valuation using its underlying cash flows. For that reason, even if the competitors you use in the comparable companies list are not perfectly aligned, it’s a good enough gauge.

You can see the data that I filled out for this example using the comparable companies in the template that you can download here: